They were rookies together. Fernando Valenzuela and Fred Roggin each made his Los Angeles debut in September of 1980.

Valenzuela threw his last pitch for the Dodgers 33 years ago. After a career of covering the likes of Valenzuela, Kobe Bryant, Wayne Gretzky and Al Davis for Channel 4, Roggin is hanging up his microphone. His last day as a sports anchor there is Thursday.

It’s his choice, he says. He’ll still appear on his AM 570 radio show. He’ll explore opportunities in television production, whether hosting shows or inventing them for others. But, after more than 42 years as a local sports guy, he is ready to throw his last pitch from the anchor desk.

“I realized dreams I didn’t know I had,” said Roggin, 65. “I’ve been the luckiest and most blessed guy in the world.”

No farewell to Roggin would be proper without an acknowledgment of the significant role he played in revitalizing the nightly local sportscast here and elsewhere.

Sports used to be a serious thing, narrated by serious-faced people.

Roggin was not one of them. A 1989 Times story on a new and lighter wave of sportscasters focused on Roggin and carried this headline: “Send In the Clowns.”

This L.A. sports ace has the Super Bowl down to a science. Here’s his game plan

NBC4 sportscaster Fred Roggin has seen it all. Before “Super Gold Sunday,” he sounds off on the Rams, Brian Flores, Tom Brady and the Olympics.

As the Channel 4 sports guy, Roggin carried on the legacy of such distinguished alumni as Bryant Gumbel, Ross Porter and Stu Nahan. The station heavily promoted Roggin with his own tag line: “Fred’ll show it to you!”

“I did say … that during an earthquake your chances were 1 in 3 of being crushed by a Fred Roggin billboard,” Keith Olbermann said in that 1989 story.

Olbermann was the Channel 2 sports guy then, before he exploded into a household name at ESPN. Roggin stayed in L.A., realizing over the years that it would not matter if Fred could show it to you if you already had seen it.

With apologies to older readers, a history lesson for younger readers: For a time, you had to wait for the 11 p.m. news to see Dodgers and Lakers highlights, and Fred could show them to you first. Then ESPN came along, and Fred still could show them to you, but hours after ESPN could. Then came the Internet, and the smartphone, and you could see whatever highlights you want, whenever you want.

“If we just sit there and tell people what they already know,” Roggin said, “there is no reason for them to watch us.”

That is not just an issue for Channel 4, or for any other television station. That is an urgent dilemma for any media outlet, including this one. 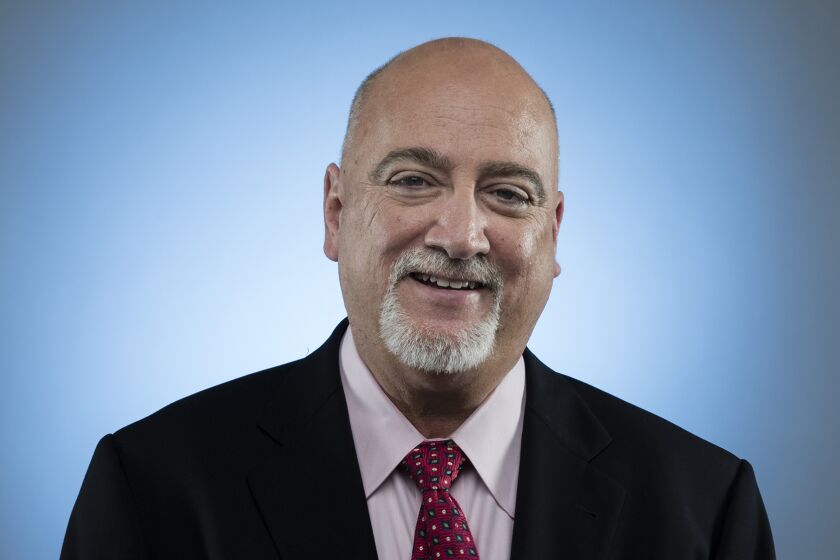 For some fans, the final score is still news at 11 p.m., or in the morning paper. Not everyone looks at a screen at night. But, for those who do, how do you attract viewers or readers?

Roggin more or less ceded the hard-core sports audience to ESPN and focused on everyone else, with “Hall of Shame” blooper reels and “Roggin’s Heroes” segments, the “Going Roggin” sports-talk-on-TV show, and “The Challenge” as a game show after the game.

And, on Friday night, even in a market of 20 million people, he featured high school football.

“I always believed that was a point where we could carry our flag,” he said. “When you pick up the L.A. Times, or check it out online, the lead story is not about a high school kid or a high school game.”

On some days, it is. The Times has committed to the dynamic duo of Eric Sondheimer and Luca Evans on high schools because The Times sees, as Roggin did, a chance to cultivate a new audience. The staffers departing, also including Vikki Vargas, Kim Baldonado and Angie Crouch, accepted early retirement buyouts offered in a round of cost-cutting.

That, really, was the essence of Roggin. Not everything he tried worked, but he tried. In this era, where teams and leagues themselves offer scores and highlights and interviews, shouldn’t a local sports report offer something different?

“That’s not how local sports is approached around the country,” Roggin said. “It’s scores and highlights. With all due respect to everyone that does it — and does such a magnificent job — it just doesn’t carry the relevance it used to.

“That is why you see local sportscasts dying.”

There still will be local sportscasts in Los Angeles, on Channel 4 and beyond. After Thursday, however, they no longer will air live from Mr. Roggin’s Neighborhood.

From ‘Banana Ball’ to a Minnesota ‘nobody’: Times Sports’ favorite 2022 stories

The Times’ Sports reporting staff selects their favorite story from 2022, a showcase of stories that hold a special place with 24 writers.

Amanda Lewis is a news writer at AZ Dispatch. She writes about arts, automotive, travel, and fashion. Amanda enjoys traveling and has visited many countries around the world. She also loves to read books and listen to music.